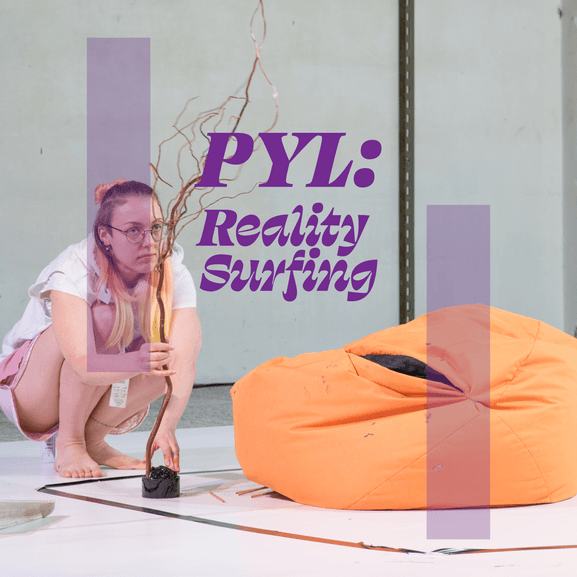 A visual performance, which proposes to the audience to experience an alternative model of coexistence of people and inanimate entities. It discovers new relations between daily objects through their materiality and presence in one space, which gain an equivalent value as presence of a human body.

The program is suitable for children from 5 years old.

The program on Monday is for school collectives.

Scenography of the piece comprises a system which exists and functions according to its own rights. It serves and requires a service; it absorbs and triggers; it’s geometry is meaningless as well as a feeling of destruction. The authors invite a spectator/ visitor to forget about rational logic and surf into a new reality composed in collaboration with sponges, oranges, machines, ghosts and other unexpected species. Each of us assemble our own small worlds with the available things and knowledge, using random fragments of reality as stones for building the wall against the wind. When the wall falls, we find ourselves in a vapour landscape which unites collapsed pieces into the new creature. Where we can surf from the cardboard box to the dolphin’s fin by accepting the terms and conditions. Where are moments of entropy and freedom, no matter if we are locked up, locked down or just among ourselves and our surroundings.

PYL is an international collective of artists who devise together in the field of postdramatic theatre, visual arts, sound and intermedia. Their practice explores the borders of anthropocentric perception in a dialog with objects and ironic attempts to grasp nonhuman agency. Through application of DIY methods, recycling and compilation principles, the group develops its own visual language, which extends the meanings of scenography far beyond the theatre stage. Their works shift cultural codes, contexts and origins of regular things, while transforming objects to beings and beings to objects. Sensitivity towards the dailiness, sharing moments and personal experiences in non-linear and playful ways transmit on the group's associative approach on coworking process.

The project is presented thanks to friendly cooperation with the Terén. 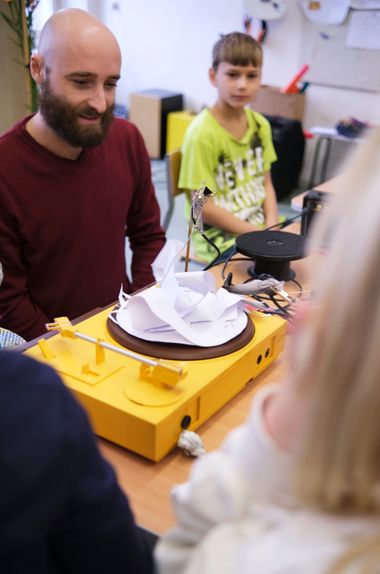 During the course of one week, pupils at Základní škola Srdcovka (Srdcovka Elementary School) will explore various electro-acoustic phenomena through a series of handmade instruments, as well as other sound objects. 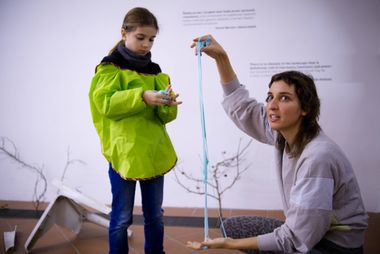 A visual performance, which proposes to the audience to experience an alternative model of coexistence of people and inanimate entities. It discovers new relations between daily objects through their materiality and presence in one space, which gain an equivalent value as presence of a human body. 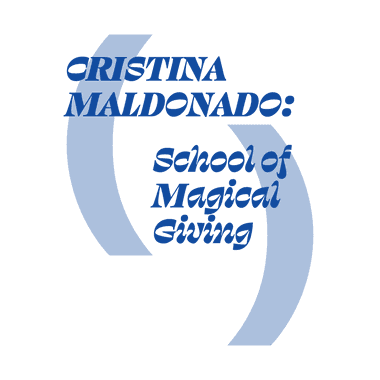 In Cristina Maldonado's School of Magical Giving, we re-learn that giving, receiving, and retributing are magical doings that create the world. The School uses conversations, experimentation, creation, and contemplation. You can enjoy an introduction to this program with our lectures that reflect on modes of giving and their political, ethical, and magical effects. You can go deeper into the process of experiencing these principles in a weekend workshop. Or you can visit the library of the School of Giving during the week to discover performative media books that document true events of magical giving and its ripple effects. 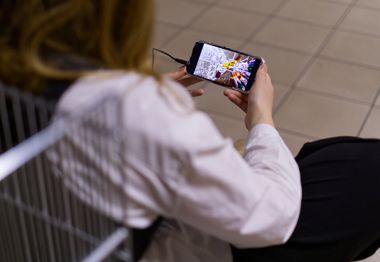 Michał Salwiński (PL): The Dream in a Supermarket

The spectator is invited to join the unique shopping experience of contemplating the supermarket universe and re-imagining connection with the objects that can be bought there. The spectator will be guided by the fictional Astronaut via mobile phone by story-telling, walking and following simple, playful instructions and tasks. 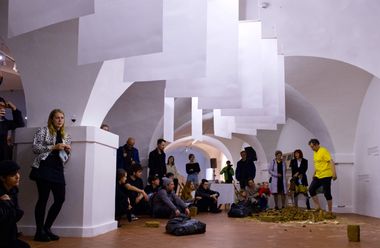 This year, the gallery space is being transformed into an open archive, diary or a background for activities that take place and will take place outside it. It becomes a space for encounters, sharing and intertwining. The opening evening will include a sound performance of the American musician based in Berlin, Max Eilbacher. 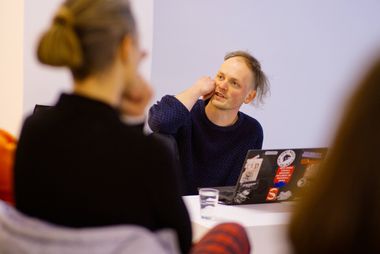 Introduction of the project Can We Help You? and Andreas Gajdošík's artist presentation. 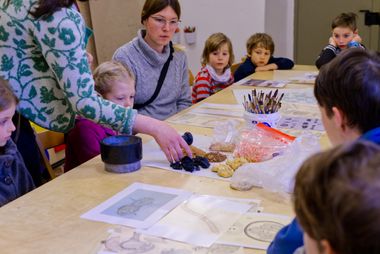 Creative Sunday: Back to Earth

Art laboratory with artist Nikola Brabcová for those who want to try preparing and mixing their own colors from natural pigments. 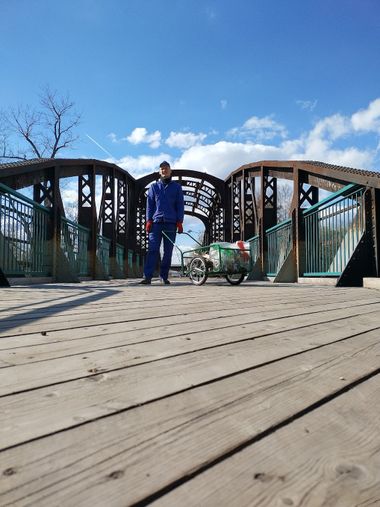 Can We Help You? | Andreas Gajdošík

What if there were a form of art that is not created primarily as a physical art work, instead representing the result of a collaboration with a specific social group or community?

Andreas Gajdošík is the first guest artist of the program layer Can We Help You? During his stay in Pardubice, he decided to help by cleaning the streets, river banks and statues. 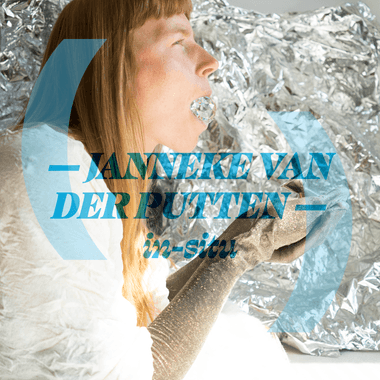 Dutch artist Janneke van der Putten will introduce her work and her upcoming workshop ‘Sunrise to Sunrise’. The objective of her project is to produce in-situ performances which will be recorded in different places in (and around) Pardubice, responding to natural environments, architectures and sites and investigating a cyclic perception of time. 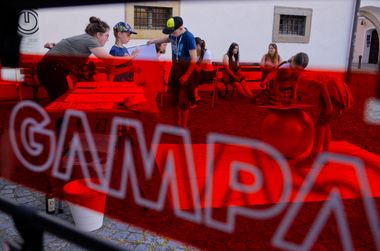 GAMPA traditionally participates in the Pardubice Museum Night, which is part of the Museum Nights Festival. Visit the exhibition space transformed into an open archive of art records that work with the topics of care, cooperation and slowing down. 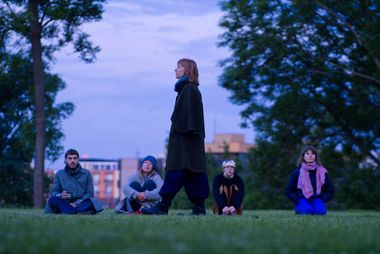 Singer, performer and visual artist Janneke van der Putten proposes a 24-hour performance and sensorial-based workshop, with the passage of time as inspiration: starting at sunrise and ending at the sunrise of the following day. 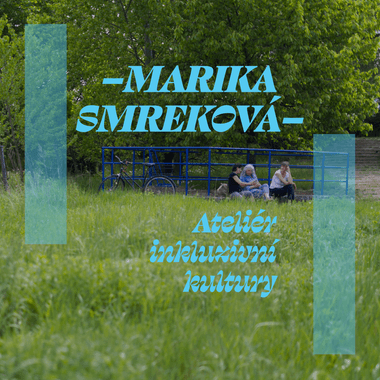 Can We Help You? | Marika Smreková

Let us remove our social stickers and create a shared space for people without age restrictions. For parents and their children and people without obligations, seniors and teenagers, for people who work or care for the evening, and those who can go to culture without a time limit. Our program will be about intersections in social gatherings, talking, trying to understand people with different life experiences, babysitting together, creative workshops, cultural activism, or learning about the benefits of social diversity. 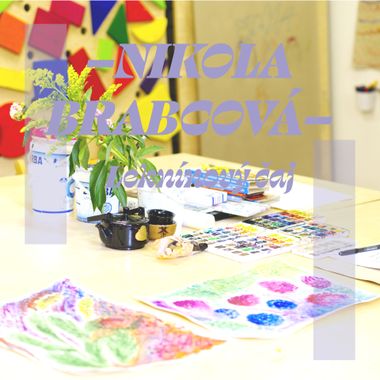 Can We Help You? | Nikola Brabcová

Nikola Brabcová invites you to the open artist's studio Water Lily Tea. The Water Lily Tea in GAMPA will be open every Tuesday, Wednesday and Thursday from 5pm to 7pm, June 7–30, 2022. The studio emphasizes the experience and the artistic process. Self-creation becomes therapy and treatment, alleviates anxieties, opens the way to change stereotypes, expands one's own possibilities, harmonizes. Come to see, experiment for a while or visit it more often. Alone, with you children or with friends. 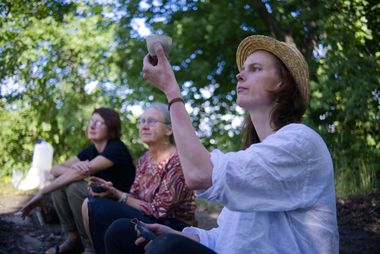 Meet with Habima Fuchs on the day of the summer solstice near the city by the open fire (see the map). Opportunity to have a rest in nature, but also to symbolically honor the element providing just like the sun light and warmth. The artist will create an improvised "outdoor workshop" designed to monitor and share the process of creating and maintaining the camp fire needed to transform ceramic bowls or shards, the surface of which will gradually change under the influence of heat. 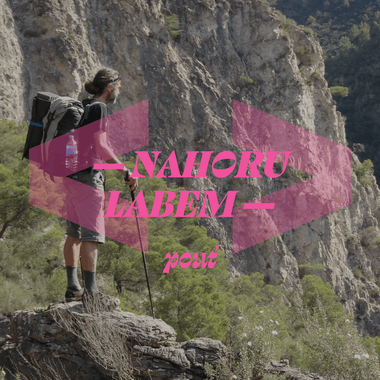 Lukáš Gavlovský: Up the Elbe

Wander along the river. Walking with the stream or heading against it? Flow with time or going backwards? 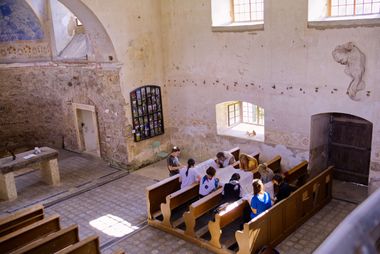 The artist Lucie Králíková planned the journey through the Eagle Mountains not only as a journey through the landscape at the border of our country, but at the same time she perceives it as an opportunity to honor places, nature and regions that are seemingly on the fringes of the attention and interest of the general public. The pilgrimage will be a tribute to the "edge" of the country, to people who once had to leave their homes and to those living here outside the big centers. At least for a while and symbolically, they will try to revive the often forgotten and slowly decaying church buildings, to which believers and pilgrims used to go. 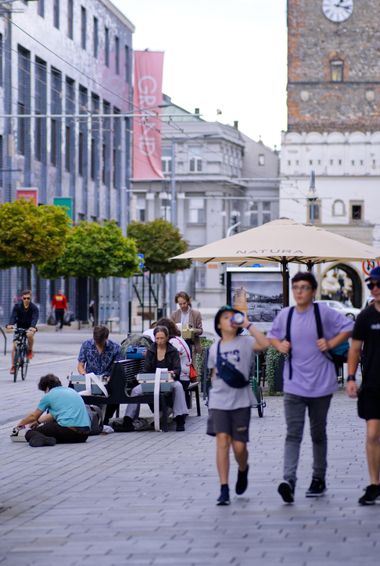 Who will sit at the typewriters? We are looking for participants in the analogue percussion performance of the poet Pavel Novotný, which will take place on Saturday, September 10, in the public spaces of Pardubice. Anyone who is open to new experiences is welcome. No previous poetic, literary, rhythmic or otherwise artistic experience is required. 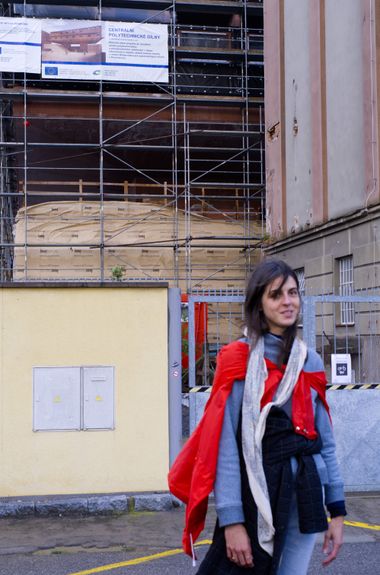 Symbolic move of GAMPA gallery from one side of river to the other one. Project lead by the team of architects Final_Final. Let's explore memories and different environments connected with GAMPA's presence, past and futures. 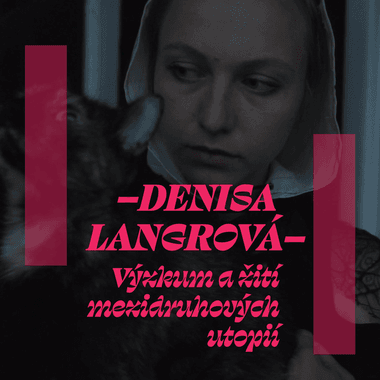 Can We Help You? | Denisa Langrová

Within the program layer Can We Help you? Denisa Langrová will volunteer in an asylum for abused and abandoned animals. She will assist in the care of animals, while at the same time he will continue to research the activities of various entities striving for an empathic approach to non-human animals and their liberation throughout history. At the end of her stay in Pardubice, Denisa is preparing a moderated discussion on the topic Velká Pardubice – the most demanding horse race in Europe (suffering and big business). 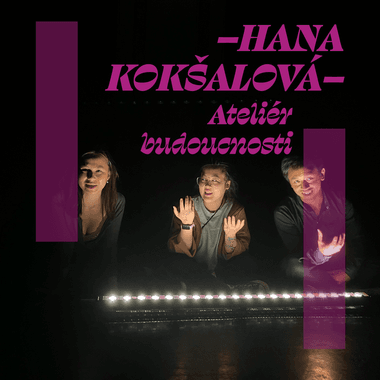 Can We Help You? | Hana Kokšalová

Artist and performer Hana Kokšalová offers a series of free workshops to everyone who would like to try working with the tools of documentary theatre. The workshops are intended for the age group of 12-20+ years, however those interested in all other age groups are also welcome. During the workshops, we will experiment with various theater and art methods that can be used to tell authentic personal stories. We will try physical theatre, dance, work with light, text and props. 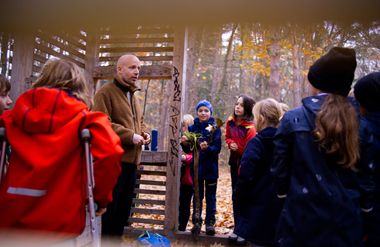 Adam Vačkář's educational workshop with elementary school children on the topic of synergy between man and nature. The author takes children back to the forest, teaches them to perceive their surroundings and process the fine fabric of feelings. Art, through education, mediates the fundamental relationship between man and nature through visuality and creative activity with natural objects.

Thank you for subscribing to the newsletter. We have sent a request to your email address to complete the email address authorization. Please proceed to your inbox.

An error occurred while filling out.
Please try again.

Your email has already been registered.