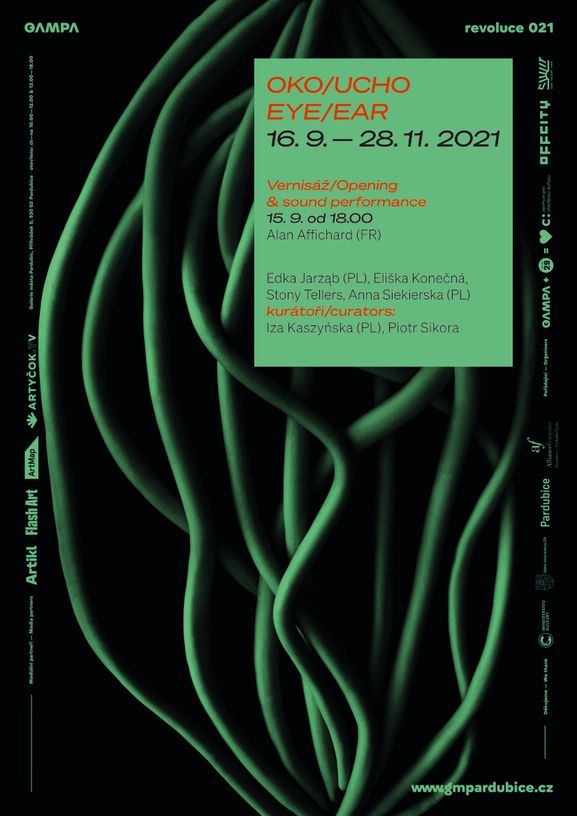 The Eye / Ear exhibition is an artistic study of the ongoing changes in the human perception of reality. We are interested in the evolution of human senses and thought, particularly the transition from the modern perception of reality (EYE) to a less evident channel (EAR), which becomes a symbol of the unification of the five channels in one. The EAR, which allows us to simultaneously receive multi-impulses, is a symbol of the transformation of our perception of the world, allowing us to open up to inter-species communication and reflections on what influences and conditions our perception.

We are particularly interested in the activation of the parasympathetic nervous system, i.e. the system that slows the organism down, helping to induce relaxation. The breath deepens and becomes longer. We are able to find calm and fulfilment. We find it easier to achieve a state of balance, trust, and helpfulness both in relation to ourselves and to those around us. The opposite of the parasympathetic is the complementary sympathetic nervous system, which, in a nutshell, is responsible for the three elementary responses of the organism that force us to act: fight, flight, freeze. We do not aim to reject one in favour of the other – that would not even be possible. Instead, we wish to create a space that provides a respite to our minds, which will then send messages to our bodies saying they are safe and can open up to the action of being here and now. The works presented in the exhibition will try to allow us to experience feelings of relaxation that make it easier to perceive through, outside of, and in between, unlearning today’s automatic human perspective, which is closely tied to the exploitation of what is outside us, outside “me”, in favour of a different perspective: one that is kind, helpful, fulfilled, and safe. Perhaps there are no words to adequately describe it, but it is certainly possible to experience it.

The artists Edka Jarząb and Anna Siekierska decided to work in a cooperative manner. As a guide, they selected a mandrake, a plant with magical properties linked to no less magical stories. They came across the following text: “The mandrake is a popular and frequent subject of paintings and drawings – depictions can be found on numerous frescoes, medieval books, or herbaria. We encounter it less frequently in architectural sculpture. An example of such a use of the motif of the mandrake is an 18th-century frieze decorating the facade of the Old Pharmacy on the square in Pardubice. It is depicted here as a plant with a woman’s face.” The subject-matter of their joint work was thus clear.

It is also said of the mandrake that when someone takes its root out of the ground, it lets out a terrible scream, which is deadly to the person who ripped it out of the soil. This plant was also popularly used for magical and healing practices that numb pain, bring people to ecstatic states, predict the future, and bring good fortune. Before the opening of the exhibition, the artists spent a week with the curators focusing on the practices of deep listening, meditation, and burning incense and aromatic woods. In their work, they aim to bring the mandrake back into a healing relationship with the human world, but also to create the appropriate conditions for this process. In order to avoid its terrifying scream, we must leave it in the soil. The artists are thus making a loud statement on our relationship with the non-human world, which includes forest protection and a ban on hunting, but also a critique of the expansive mining of minerals or the drying out of wetlands for the construction of infrastructure and housing.

The work presented at the exhibition consists of listening – a listening that is the opposite of exploitation. And also a listening we, as humans, can offer other beings. One can use one’s body as a sonic instrument, emanating healing and cleansing songs. The production of vibrations of a certain frequency inside the organism brings one peace. This practice is used in meditation and prayer, as well as in childcare. The artists wish to establish communication with the mandrake through the means of a lullaby, and then proceed to listen to it. In addition to the song, the exhibition will also include tools for gentle and deep listening. Strong links to their work can be found in the books The Word for World is Forest by Ursula K. Le Guin and Leonora Carrington’s The Hearing Trumpet. Dreaming, singing, and listening – as the artists suggest – can bring delight and pleasure both to us and to the relationships we create.

Jana Mikle and Tania Nikulina, who form the StonyTellers artistic duo, focused their realisation on an experiment in growing mushrooms, turning part of the gallery space into an amateur mycological laboratory. The similarity between the shape of the mushroom head and the human ear is, in this case, intentionally emphasised: it suggests that the installation is watching us, though perhaps the phrase “listening to us” would be more apt in this scenario. The Baroque spaces that served as a granary for many years, protecting supplies from unwanted guests, now become a stage for the blossoming of a live mycological installation. The fruits of this realisation – dried and ground to a powder – will be offered to visitors as we near the end of the exhibition.

The exhibition format will invite visitors to experience rather than to learn. Our ambition was to create a space in which artistic expression assumes the form of small transgressions and a stay in the gallery ultimately leads to thinking about alternative forms of knowledge. A symbolic portal that invites us to examine, cuddle up, touch, and fall in, is Eliška Konečná’s installation. The hand sown composition, surrounded by a soft fabric frame, evokes ancient caves that were witness to the first human rituals. Dancing on its walls were the shadows and figures sketched by the light of the fire – a young element that was still burning somewhat shyly.

The tools brought to us by technological advancement and the network society create an alternative way in which to establish communication and construct new relationships of interpersonal and inter-species cooperation. We, however, propose that we listen in to the sounds of practices connected to community: ritual; coexistence with the world of plants, animals, and fungi; a dissolution of the oversensitive individual “I” in favour of the collective “we”; a sensitivity to the narratives and perspectives of plants, animals, crude oil, or clouds. The range of our project stretches out from work with the ancient, expansive network connecting fungi, roots, and micro-organisms, through ritual burning, to meditative singing and establishing mysterious inter-species connections. 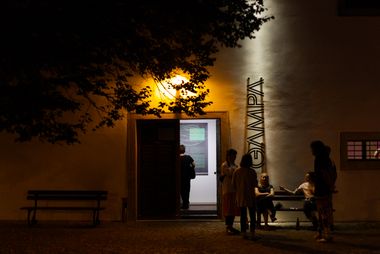 Exhibition opening of the Eye / Ear project curated by Iza Kaszyńska, Piotr Sikora. As a part of the vernissage evening, there will a sound performance of Alan Affichard, French sound artists based in Berlin. 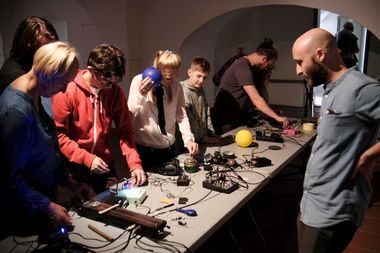 14.00 / 16.00 / 18.00 | Sound workshop with Alan Affichard, French artist based in Berlin. The workshops consist of one hour of sound exploration through diverse handcrafted objects and instruments. The gallery space will change into a sound lab, where the participants will be invited to manipulate objects, reading their contour and surface with microphones. Inspired by the artist's practices and his improvisation techniques, the group will experiment with vibration and resonance of different objects and materials.

Felix Blume: Listening as a way of collaboration

Félix Blume is a sound artist working, currently living and working between Mexico, Brazil and France. His work is focused on listening and a collaborative way of working with communities.